The Oblate Fathers established the Notre Dame College (Now University) in 1948.  It was the first College founded in Cotabato City and the entire Province of Cotabato.  It was primarily established as teacher training institution.  It offered courses in Liberal Arts, Commerce and elementary Education.  As soon as the school started operating, building of library collections also began.

In the early years of the University Library it maintained three divisional libraries:  the Main library for General Circulation on the (Ground floor Burke Hall) Periodicals and Filipiniana Libraries (third floor Burke Hall) and the Law Library on the (2nd floor of the O’Keefe Hall).

On August 17, 1976 a strong earthquake rocked Cotabato City causing damage to the buildings and other structures.  The earthquake did not spare NDU.  The library and its collections were moved to the Sullivan Hall, where it remained until 1988.

On December 8, 1988, the United States for International Development (USAID) financed the construction of the library building, was blessed and dedicated, to St. Eugene de Mazenod founder of the Oblates of Mary Immaculate.  Ambassador  Nicholas Platt, the US Ambassador to the Philippines graced the occasion.

The first librarian to head the University Library is Mr. Samuel F. Cabiles.  When Mr. Cabiles left the library in 1988, Mr. Leonardo A. Ninte, Sr. assumed the position of a University Librarian.

In 1992 the Library was charged to a Library management Team composed of Sr. Dorothy Mulligan, MM as Chairman, Mr. Leonardo A. Ninte, Sr., Mrs. Amelia Cando and Dr. Briccio M. Merced, Jr. as a members.  When Sr. Dorothy left the University for other assignment, Mrs. Josephine J. Ochia was appointed as OIC director of Libraries in 1994-1996.

Over the years the University Library had established its linkages and collection with partner institutions.  It has linkages with the US Embassy through its Thomas Jefferson Information Center (TJIC), The Work Bank through its knowledge for Knowledge for Development Center (KDC), Peace Institute Center (PIC), Asian Development Bank (ADB), National Statistics Office (NSO), world Health Organization (WHO), United Information Center and the Asia Foundation. 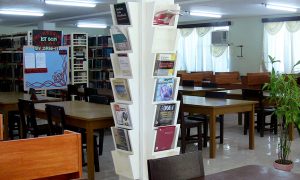 In 2003, the Data Resource Center was changed to University Library consisting of the Print, Non-Print and Electronic materials.  Prof. Sonia D. dela Cruz assumed the position University Librarian in 2003 until her retirement in May 2018. As head of the sector, she is also assigned as Director of the American Studies Resource Center (ASRC) and contact person of the Knowledge for Development (KDC) Center.

In 2018, the university library was named as the university’s Learning Resource Center (LRC). Prof. Charlyn S. Tacan was delegated and assumed the position director of the department from June 2018 – present. As head of the sector, she is also acting as the Director of the American Corner and contact person of the Knowledge Development Center and the Bangko Sentral ng Pilipinas – Knowledge Resource Network.